An introduction to Biology 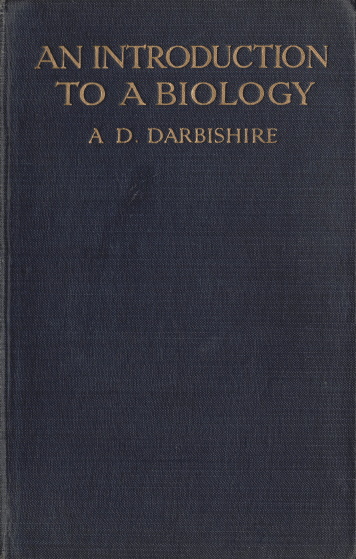 The complete titel of this book; An Introductio to Biology and other papers.
Arthur Dukinfield Darbishire, son of Samuel Dukinfield Darbishire, M.D. Oxon., was born in 1879, and educated at Magdalen College School and at Balliol College, Oxford.
He worked under Professor Weldon for the Honour School of Zoology, and was placed in the Second Class in 1901. In October of the same year he was appointed Demonstrator in Comparative Anatomy at the University.
His interest in the problems of heredity was already beginning to absorb him.
At the instigation of Professor Weldon, the leader of the Biometric school at Oxford, he began a series of breeding experiments with mice, the results of which were published in Biometrika.
He had a profound admiration for Professor Weldon, and was, not unnaturally, influenced at this time by his hostile attitude towards the Mendelian School.
But when he moved to Manchester, where he filled the post of Demonstrator in Zoology at the University from 1902 to 1905, he began to think out on his own lines the problems raised by the Mendelian discovery.
Engelstalig